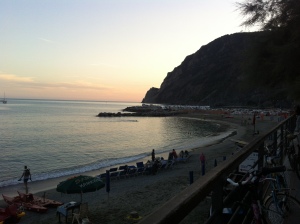 This was the view out of the window in our room at Albergo Pasquale.  We arrived after a very trying day flying from Paris to Pisa and then taking a regional train to Monterosso.  As the sun set and we gazed at the harbor our attitude adjusted rapidly.  Monterosso al Mare is one of the 5 villages named the Cinque Terre which hug the western side of Italy.  The Ligurian Sea is clear and warm.  There is no sandy beach, however, just pebbles.   We were on the third floor which diminished the street noise which was considerable on the weekends; less so on the weekdays. 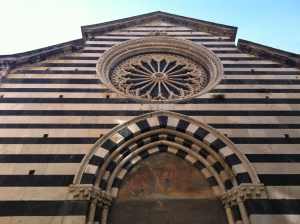 Striped buildings abound.  The black and white one above is the principal church in the village.  The one below is an apartment building. 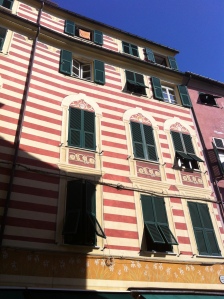 The picture below shows the beginning of the hiking trail which connects Monterosso with Vernazza.  This trail can be hiked in two hours if you go to the gym a minimum of 3 times a week, or do half marathons on the weekend.  According to the travel maven who lives a few miles north of Seattle, the entire series of trails that connect all five of the villages can be hiked in about 5.5 hours.

Another piece of information you might want to tuck away for future reference, this trail, the one we hiked, is vertical for about half the three hours it took us to go from Monterosso to Vernazza. And of course dives down to Vernazza over rough shale-covered trails at the end. 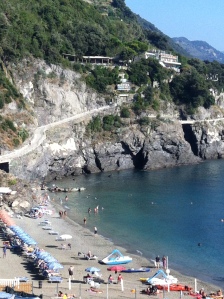 That white snaking path you can see in the distance is the hiking trail. Most of the time it is too narrow to accommodate two hikers walking abreast. There are occasional wide spots which allow people to squeeze by. 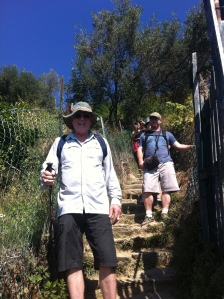 Here is Ken at the conclusion of the hike.  Proud indeed.  Holding a stick loaned to him by a kind young hiker who, I think, feared for Ken’s life! 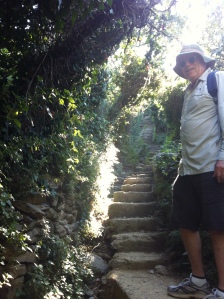 Here is Ken at the beginning.  We had no idea this was going to be the major part of the hike–UP! 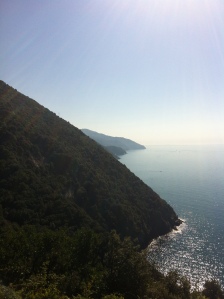 This is the view from the high point.  Looking south toward Vernazza.  I had a hard time initially but once I caught my wind, I enjoyed the effort and the views.  There were lots of young men and woman–college age or younger–on the trail.  There were also way too many “anziani” who were really struggling.  If you fall into the “anziani” category (I think you can translate, no?) be sure you’re fit and ready for the effort.  It is not easy. 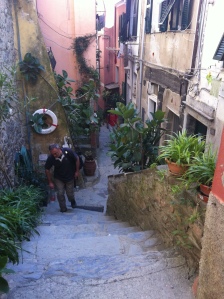 You enter Vernazza and continue on through small streets until you reach the harbor where you can catch one of the ferries which ply the coast and will deliver you to any island in the chain.  A great idea indeed! 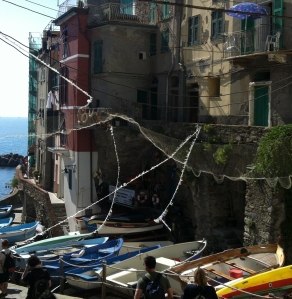 This is the harbor at Riomaggiore which we visited by ferry.  You can hike there is you wish! 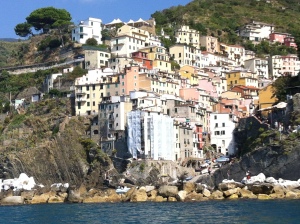 This is Vernazza from the sea.  Not a lot to see except for the same old tourist stuff you’ve already seen at the other villages.  But don’t go for the stuff–go for the sights, the sea, and the color of the beautiful villages.  There is no internet, really, although all the hotels will tell you there is.  Italy has not invested in broad band so it’s slow if you can catch it and intermittent when you do. 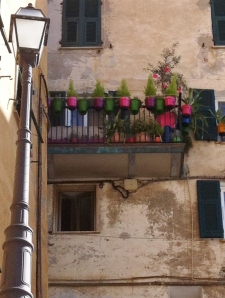