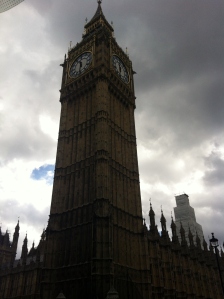 Here’s the view as you exit the Westminster tube stop.  Almost hard to believe. One does gasp upon seeing an icon in your path. Crossing the road–carefully– the Parliament buildings spread before you.

I found the notice of the Sovereign’s Gate interesting. Every monarch since 1066 has been crowned across the street I suppose they rate a door of their own when the members of government meet!

We crossed the road walking toward the cathedral. It was Sunday and services were being held so we did not go inside. We did wander through the Abbey behind the cathedral and read the very interesting plaques on the walls and embedded in the stone floors naming those buried nearby. This is the oldest portion of the complex. One of the plaques was of particular interest. It memorializes Frances Louisa Parnell who lived six short years: 28 October 1806 – 1812. This child lies among many who accomplished much. Who was this girl and why is she here?

It was threatening to rain so we took a quick cab ride down the road to the Tate Britain as they call it to differentiate from the Tate Modern located elsewhere. This museum houses a rotating collection of the work of British painters only from the 1500’s to current time. I cannot say that these are my favorite painters or paintings but I enjoyed several pieces and the progress of history through the collection.

The King and Queen by Henry Moore is just wonderful.  I shot the shadow. 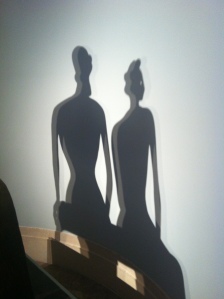 I also liked the sculpture “Large Leaping Hare” by Barry Flanagan who captured the exuberant physicality and rangy build of the hare with brilliance.

After a light lunch we walked to the Pimlico tube station where I photographed this delightful man dressed for a punt down the River Cam. He told me he dresses every day in a similar manner! 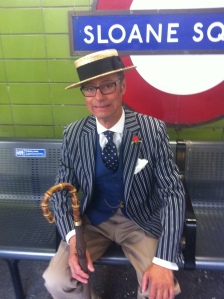