Up and down.  A little sun, heavy rain.  Clear blue sky above with puffy, white clouds.  Dark and threatening skies, rain imminent.  Warm and breezy, blustery and chilly.  So it has gone now for 11 days.  Tomorrow it will drop to 40F an unheard of low for September.  The weather is a bit like my feelings: some days I am so frustrated by Paris, I vow I’ll never return.  Other days, I wish I could stay here forever and walk endlessly in these ever unwinding streets full of their odd little shops and bistros; the endless boulangeries, patisseries, boucheries, fromageries, shops, marche des fruits, and just about anything else you can conceive.   Not to mention the museums and the churches.  They’re all here waiting to be discovered.  It’s exhausting, it’s fascinating.  It’s impossible but we try–about 5 miles a day on foot–we try.

Did you know there is a canal in Paris?  I didn’t.  There is.  Canal St. Martin.

The canal is about 3 miles long with lovely iron foot bridges to cross from side to side It has nine locks which allow boat traffic to pass up and down. The end point is the Arsenal Marina which accommodates over 200 boats. On a sunny day the canal is a serene area along which to walk shaded by many mature trees.  Recently trendy shops and galleries have sprung up around the portion of the canal north of the Marais.  Our walk to see them was cut short when a downpour hit us about midway along the canal.  We were fortunate to get a taxi as the nearest Metro, Stalingrad, many blocks away.

We decided to go to the Louvre until the storm subsided. Like most big cities, when it pours the traffic gets even worse than it is already. In Paris it’s really a mess because the streets are so narrow and winding it is impossible to just speed away. We finally did make it to the Louvre and were bowled over again by its splendor–the buildings, the gardens, the courtyards, and yes, the pyramid. Our Museum Pass allowed us to go to the head of the line and in we zipped. Hardly wet at all.

We headed to the ancient ruins excavated several years ago which reveal the earliest foundations of today’s monstrous structure. The archeology is fascinating. 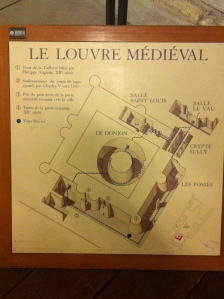 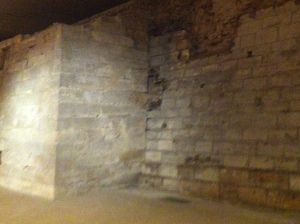 It’s hard to believe that these stone walls (and others, of course) hold up the enormous edifice that rises above. After wandering around the ruins, we moved upstairs to see the Egyptians. Forgive me, New York City which I love and the Met which I always visit like a pilgrimage site, but this collection so far surpasses any other museum’s there is simply no contest. Rooms, vast and spectacular with painted ceilings embellished with gold, gold, and more gold. Marble absolutely everywhere–floors, walls, and columes–not pale unpatterned marble but marble in colors and configurations rarely seen. This was the home of kings and queens beginning with Philippe August in 1180.

The Egyptian wing consists of rooms filled with every small and large item of Egyptian life and death and in splendid condition and color illustrative of life 5,000 years ago, give or take a few hundred years. 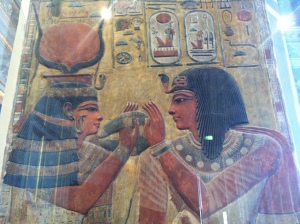 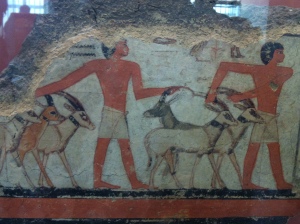 The rain had stopped. We were exhausted and decided to get outside and into the fresh air. We left the museum still awe struck by what we had seen and all that we had not. We had seen only the tiniest bit of the enormous holdings inside the museum’s walls. 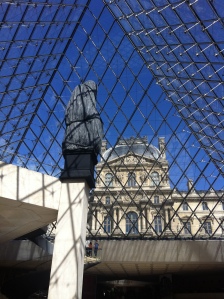 It was time for a treat. We were on the Rue de Rivoli and headed to Angelina’s for the best hot chocolate ever bar none. Definitely better than a martini! 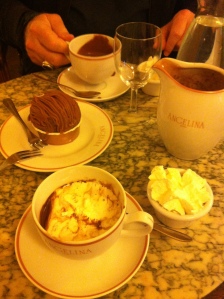