We’ve just come from a neighborhood Italian restaurant, Zanni, whose food was simply delicious.  Traditional Italian food, vegetables, pasta, and a tiramisu to die for which is what I ordered.  So delicious.  I remember the first time I had tiramisu.  It was in Venice.  I didn’t know something could be so delicious and be made by human hands.  When I returned home to Seattle, I tried to replicate it and I did a fair job but there’s nothing quite so wonderful as tiramisu made by an Italian.  In this case tonight, it was made by one of our waiters–a man–and it was so good!

But what am I trying to make sense of?  The four plays we saw this past two weeks.  Somehow they all seem to have a theme that I am trying to uncover.  First:  The Sweet Bird of Youth by Tennessee Williams the quintessential American southern play write.  The play is about two individuals with aspirations; one to return to fame and recognition and the other, Chance, to atone for a grave mistake and receive absolution. Sadly, Chance comes to a cruel and violent end which he accepts and seems to welcome.

The second The Tempest by W. Shakespeare is about a man who was supposed to drown at sea and who did not.  A man who became a magician and raised his daughter to become a charming young woman on a deserted island.  A man who forgave those who had wronged him and whose daughter married for love.  And another character–half spirit, half man–who was set free from bondage.  Ariel, the most intriguing subject of the play,aspired to be human.  In the end, he was freed, but we don’t know how he fared, or if he found a companion.  He was set free. But to do what? Was he to remain on a deserted island? Can you be free if you are alone?

And then A Chorus Line.  A play I first saw at the height of the AIDS plague.  I was employed in the Infectious Disease unit at the University of Washington.  I worked with researchers and physicians who spent their professional capital and time combatting the ravages of a then little understand plague.  I knew lovely men who died of AIDS in those early days.  A Chorus Line today did not mention or even elude to AIDS.  It was about needing a job and what it took to get one.

The newest play The Curious Incident of the Dog in the Night Time was about an autistic 15 year old who wanted to live in circumstances that would allow him to succeed. He needed defined boundaries to succeed at math, and the physical and astrological matters that interested him and at which he was very, very good.  The actor, Luke Treadaway, did a superb job of showing us how difficult those simple aspirations are for an autistic individual with great intellectual abilities, loving parents and a good school.  Imagine how awful life for those with autism or other disabilities must be when they lack any or all of those conditions.

And then there was the British Library which houses documents that underlie all of our aspirations:  the great contract “The Magna Carta” which underwrites the Declaration of Independence and our Bill or Rights which tells us that no one can take away our basic rights to life, liberty and the pursuit of happiness.  These precepts are what underlie each of these plays.  Each tries to express our yearnings for the realization of our aspirations and delineates how we may fail and fall short.  What a wonder to be able to view all these things and to be moved by them and to understand that there is much we can do and much we should do, and much we cannot do.

It poured yesterday so we decided to take cover in the British Museum. Bad idea. We and 10,000 desperate parents many pushing strollers had the same idea. There are only three restrooms and as far as I could see one “lift” suitable for transporting strollers from ground level to level 3. Need I say more. Fortunately, we can still walk stairs. 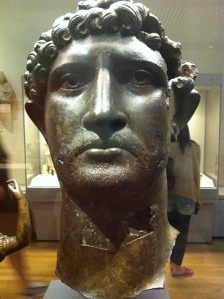 Later in our trip we will be staying at Hadrian’s Wall in a little town named Twice Brewed. I wanted to view the Romano-British collection so we headed to room 39 where it is housed. This bust of Hadrian was plucked from the Thames near London Bridge in 1834.  He visited Britain in 122 CE.

This is a mask of a Roman Centurion from the same time period.  The image of the young soldier is very beautiful.

Mesopotamian artifacts are in the adjacent room.  This spectacular tile with the image of Ashtarte/Ishtar intrigued me.  I love her owlish companions and her bird feet. My Hebrew name is Esther which derives from the same root as Ashtarte and Ishtar. Ish means woman in Hebrew. All interesting.

I found one other piece very interesting. It’s titled “Ram Caught in Thicket.” I immediately thought of the ram caught in the burning bush from the Bible and wondered if there was a connection. I wonder who made this statue.