Like all big cities, Rome is hard to learn especially the old central part of the city.  It is a jumbled puzzle box full of odd shaped pieces made up of short, narrow, winding, cobbled streets which change names erratically.

We are presently living on via Cappellari  which is more or less parallel to via Giulia and the Tiber.  Via dei Cappellari–the street of the hat makers–runs for several blocks under that name and then passes through the Campo and becomes Via dei Giubonari crosses Via Arenula and heads into the Ghetto as Via di Portico d’Octavia.  It’s important to know how this works because you might be on the “right” street–the one you are searching for–just haven’t gone far enough–or too far.

Another thing you might not recognize as valuable information are rione numbers.  Just as Paris has its arondissements, Rome has rione.  A street sign might say via Cappellari rione vi.  To a Roman this tells them where you are in the same way zip codes do in the U.S.  That said, Romans refer to landmarks, this piazza or that church, to give directions.  All this has to do with getting lost because you will: all the time, night and day, and you either allow time for being lost or you hire taxis or you exhaust yourself and have no energy for viewing the monument you wanted to see.  Getting lost isn’t bad really, unless you’re tired, need to use a toilet, or are late to a dinner date.

Reservations for dinner are important if you’re going to a good place.  By good, I do not mean expensive.  Last night we ate at Matricianella on via del Leone near San Lorenzo in Lucina.  It’s small and very popular.  The food is delicious.  I had carciofa giudia and tagliatino tartufo.  I love truffles and this dish was topped with shaved black truffle over barely sauced perfect pasta.  A green salad and sorbetto shared with Ken who had a buffalo mozzarella with prosciutto, and lasagna completed our menu.  I had a glass of prosecco and we each ordered a glass of a local red–rich and dark.  This with a litre of sparkling water and bread came to 70E or $87.

Many tourists fall under the spell of sitting at a café just outside a famous monument.  Your decision will cost you more, and probably will be inferior to, the small café off the tourist path. The cost of a café–one shot of espresso–standing at the bar will be 1E.  When you have table service it will be double that or more depending on your location.

We have a favorite little coffee bar we visit every morning for cappucino and cornetto. They also make fresh orange juice in a tall glass. Two cappucino, two cornetti and one OJ cost 8E.

Selecting a place to live–in our case for two weeks–can be very difficult. All the on-line booking sites that show pages and pages of pictures are not always what they seem. We found the pictures deceptive in some cases and the availability calendars frequently inaccurate. I’ve come to the conclusion the requests we sent in were used to get us to take places we hadn’t inquired about but that were available.

We eventually took two places; one for 8 days, the other for 6. The first one was a huge disappointment. The old building was gorgeous from the floor landings and it was quiet, but the apartment had no views and was in need of maintenance and cleaning from top to bottom. Deposits aren’t refundable so you’re stuck if you’re unhappy. 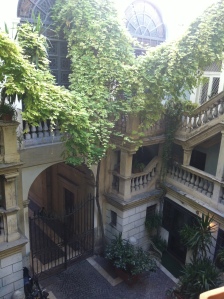 The second place is lovely. It’s only drawback is street noise; few cars but motos, late night diners, and general street noise would keep us up all night. Luckily the owner wisely installed new sound proof windows and a modern AC unit in the bedroom so we sleep soundly. The rest of the place is lovely. Light is a premium and this apartment has two windows in the bedroom and a big window in the living/dining room.

We’ve had many interesting discussions with Italians–usually artists whose studios we visit. They often speak good English and are eager to talk about politics and economics. They are universally worried about Italy and what lies ahead for them. I would describe them as depressed and very concerned. One artist who is married (his wife is also an artist) with a five year old pays 1,000E for studio rent and 1,000E for his apartment per month. He said he is having a very hard time making the rents. If Italy goes down, he’ll move to Philadelphia where he has family. His story–in one way or another–was repeated over and over again.

This despair and concern is mixed with anger over the ever increasing taxes the government is applying. Speaking with a FedEx employee about the cost to ship a package, we were told an additional tax of 22% will be applied to the cost of shipping as a result of recent new regulations.

Of course, this inclines us to use the Post Office which we have been doing. There is no tracking system which is alarming. Sometimes we wonder if we’ll ever see our things again. We had real pause for concern at the Rome PO the other day when we paid over 200E to send two boxes–the entire amount had to be paid in cash. They do NOT use credit cards. We were scratching our head over a postal system in the capital city not set up to use credit cards. How could that be!

Despite these differences from our tidy lives at home, Rome remains a beautiful and interesting city.  So many amazing and richly soul-rewarding experiences.  I spent four hours yesterday at the Etruscan museum viewing rooms full of ornaments, furniture, household goods and statuary.  At one point, I stood before a life-sized Etruscan couple lounging together on a couch.  I knew they had lived many hundreds of years ago however I was profoundly moved by their smiles, their outstretched arms and beautifully modeled hands beckoning me to join them at a banquet in their home high on some Tuscan hilltop.  My guess is the evening would have included musicians, dancers and witty conversation.  For a moment I was there.