Yesterday we spent most of the day in the Marais district of Paris–the 4th arrondissement just across the Seine from where we are staying in the 5th.  If you don’t already know, the last two numbers in a Parisian address’ zip code will indicate in which arrondissement it is located.  That’s useful information as you make your way around the city. 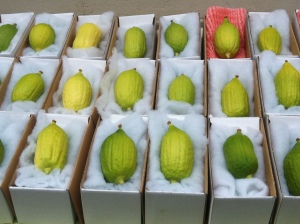 The 5th is a very interesting part of the city; it’s very old–has had its ups and downs–but is flourishing today. It’s full of trendy shops, and many Jewish institutions.  That may seem an unlikely match but everyone is managing pretty well it seems.  As we entered the Marais we encountered men wearing kippot selling lulav and etrog for Succot. Others in black hats and beards were hustling in and out of the synagogue preparing for the kol nidre and yom kippur services later this week. There were lots of women buying challot and other foods to break their fast at the conclusion of Yom Kippur this Saturday at sunset. 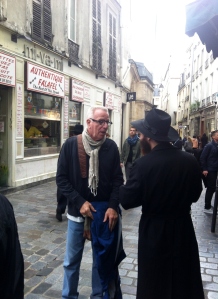 Speaking of fasting, we were starving and headed to the best falafel in town.  We’ve had falafel in Israel and some poor imitations at home in Seattle, but the food at L’As du Fallafel is the “Ace of Fallafel” for sure!  I’ve never had a more delicious lunch–well, almost never.  The line was long, but we moved quickly to the head and were seated in a small dining room stuffed with people.  The staff spoke French, Hebrew and English and were efficient and courteous.  In ten minutes our falafel was on our plate.  Huge!  Warm fresh pita, its pocket open and yawning, full of cabbage, grilled eggplant and a great tahini sauce.  The little round falafel balls made from ground chick peas and wonderful seasonings were toasty and delicious. They were pushed into the pocket until it was bursting.  We ate it with a fork–hard to get a mouth around this baby!  A meal in a pocket!  For 8E.  A real bargain. 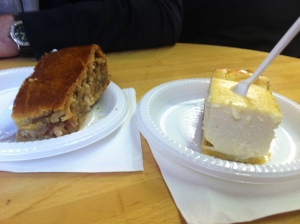 Then we wandered across the street to the Jewish bakery and managed to consume a Vienese struedel and a piece of cheesecake.  I make a pretty good cheesecake; mine is dense with a tang of citrus.  This one was smooth as cream and tended more toward vanilla.  Just so we wouldn’t go hungry, we bought two enormous triangle shaped spinach and paprika boreks to take home for dinner.

Today I had the second “best” lunch of my life! Ken received a thoughtful gift from a colleague for lunch at Le Taillevent restaurant located in the 8th arrondissement on a quiet street not far from the Champs Elysees. We were warmly greeted by the Directeur Jean-Marie Ancher who we later learned has been with the restaurant for 38 years! We were seated and a ballet of charming waiters transporting amuse bouche, water, wine, and heavenly food began. It all concluded several hours later. I noticed the staff placed small stools beside ladies’ chairs on which to place their handbags. I observed the sommelier use a lit candle to determine if a red wine was clouded prior to decanting it into a clear container. I found the entire process from beginning to end not only delicious, but fascinating. And this was lunch!

We had a three course lunch which included a starter, an entrée, a cheese plate, and dessert. All this was followed by small candies and cookies, a surprise glass of the house cognac and espresso. I am not a “food writer” and won’t attempt to describe the preparations and ingredients of each course. I can only say that my starter a flan of artichoke with minute chanterelles posed on top was divine. The entrée of monk fish was sweet and tender. My dessert of a rhubarb and strawberry fantasy was delicious. Each course was light, the seasoning was impeccable and the presentation so beautiful it seemed a shame to put fork and knife to it–but of course I did. The wines were chosen for us for each course and were better than any wine I have every had. I was served a white wine from Languedoc with my entree. I loved it.

Our waiter, Phillipe, was wonderful; his English was excellent. He was fun and easy to talk with; he and his colleagues were unpretentious but highly professional. We were worried that the ambiance would be overbearing but it wasn’t at all. Our heartiest cheers to the lovely woman who gave this wonderful gift to us. It was superb!