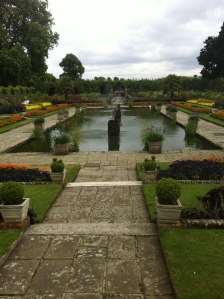 Whilst we were in London we visited Kensington and Kew Palaces.  Kensington is the palace where young Prince George will live with his parents the Duke and Duchess of Cambridge. It was also the palace where Victoria grew up, made a life with her beloved husband, Albert, and raised their numerous children. The gardens at Kensington have been beautifully restored and entry to them is free. However the interior of the wing that the National Trust maintains is not–about 15 pounds per person–approximately $45 for two.

The day we visited, the featured exhibition was one on Victoria’s life “In Her Own Words.” It was quite interesting as she, and others writing to her and about her, chronicled her life, that of her family and friends, and world events through letter, diaries and so on. When Albert died, Victoria, who depended upon him for everything, went into a severe depression which caused great concern among the court and parliament. Eventually, she pulled herself together, but was never the same. She remained in mourning for the rest of her life.

The famous Crystal Palace build in 185l for the Great Exhibit was a pet project of Prince Albert. The Crystal Palace eventually collapsed. However, there is a smaller version of it at Kew Gardens. 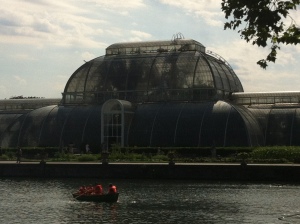 The large state rooms which are open to visitors were disappointing.  The rooms were sparsely outfitted in what seems to be leftovers from granny’s attic. (Even if granny is the Queen, the furniture was scant and unimpressive.) The paintings were uninspiring and the work of lessor artists. I overheard a “warder” tell a visitor that the frames were more valuable than the paintings!

The rooms are kept oppressively hot which keeps you moving from glass case to glass case. Perhaps that is the idea. Loads of people come pouring through these palaces and body heat alone keeps them warm. No windows are opened and there seems to be no AC.

The big attraction was two large rooms displaying the gowns of the royals worn over the past 60 years including several outfits worn by Princess Diana. Anything having to do with her is guaranteed to draw huge crowds.

After Kensington we decided to take a boat ride up the Thames toward Hampton Court and stop at Kew Gardens along the way. After sitting in a small boat in the hot sun for two hours we disembarked at Kew. Kew Palace is more intimate than most “palaces” more manor house size, (probably about 15,000 sq. ft.) and more interesting. It was the home of George III, his wife Charlotte and their 14 children.  You may recall that George III was in charge of the colonies when we rebelled and won our liberty. In addition to being a “despot,” he was a loving husband and father and not a bad king. 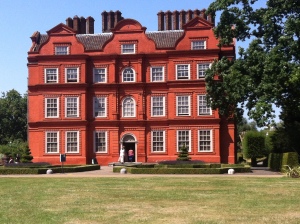 The furniture in the rooms at Kew Palace are original to it.  The palace looked lived-in and charming.  I tried to imagine 12 or so daughters in their elaborate coifs and gigantic skirts, lace and ruffles managing to get dressed in a building that had one or two “necessaries” and bath water that was hauled up from the river to the second floor of the palace. Cooking and laundry were done in separate houses nearby. Kew Palace is set among the vast Kew Gardens some of which are a little tired and others quite wonderful.

Blenheim is another story indeed! It is located in Oxfordshire outside the London city limits. It has never been the home of a monarch. It is the ancestral home of the Spencer-Churchills.  John Churchill won a decisive battle at Blenheim in Belgium in 1704 against French forces. This battle halted King Louis’s expansionist dreams and his probable path across the Channel to annex the British Isles for France.

After his great success at Blenheim, Queen Anne, the reigning monarch at the time, awarded Sir John the funds, the land upon which a monumental palace was to be built, and a title: Duke of Marlborough.  She made two demands: that should a male heir be unavailable at any time in the future, the title and the estate would go to the eldest daughter. This decree was an enormous change in tradition and practice. Further, she demanded that each year a member of the family must appear at court and present a banner to the monarch symbolizing the great victory at Blenheim and the continued loyalty of the family to the monarch. They have never failed to show up to do so for 308 years!

Blenheim can claim at least one other hero: Winston Churchill, who was born at Blenheim in 1874. Like his forbear, Sir John Churchill, Winston Churchill was a great military strategist. He went on to lead the Commonwealth to victory over the Germans during World War II. He convinced the U.S. to join the fight and together the Allies beat the Nazis. Winston’s mother, Jenny Jerome Churchill, married Lord Randolph Churchill in 1874. He was the third son of the 7th Duke of Marlborough.

Blenheim is the most wonderful palace I have ever seen.  The rooms are vast, well proportioned, tastefully furnished and elegant.  The gardens, park lands and lake, originally designed by Lancelot “Capability” Brown, are magnificent.  The docent tours are excellent and come with the price of admission–about $60 for two.

The lovely portrait of Consuelo Vanderbilt born in New York City in 1877 who married the 9th Duke of Marlborough hangs in one of the staterooms on the first floor of the Palace. Consuelo brought to her marriage a trousseau of $2.5 million in railroad stock. The marriage was annulled in 1926 but not before she gave birth to the 10th Duke!

This is the home of the 11th Duke of Marlborough and his family and is clearly much loved. You have a sense that you are welcome in their home–I know they need the admission fees to keep it all going! 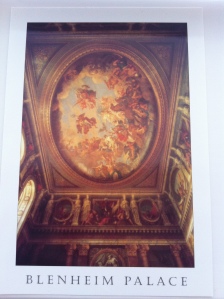 Gossip has it that the current heir to the title is a disaster–with the usual list of bad behaviors and bad habits. The Brits I overheard discussing this state of affairs feel it’s a result of having so much wealth and status and never having to do a lick of work! They’re probably correct. Maybe he could be assigned to weed the vast flower beds.