Another small town–the second oldest town in Oklahoma.  Created by the intersection of the railroad tracks which still thunder through town.  High hopes here to learn somethng new. 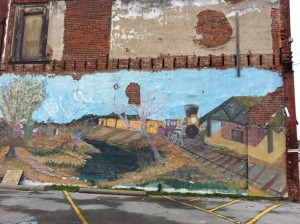 My great grandparents came here when it was Indian Territory— probably in 1889 the year of their daughter’s birth.  An exciting time for Alice, or Allie, as she was called; one of Vinita‘s first teachers.   While there was a picture of the

head master in the Eastern Trail Museum in Vinita, there was not a picture of the staff.  I have never seen a likeness of any Sherer and had hoped to do so in Vinita.  No luck!

James Lenore Sherer was a successful businessman engaged in well-drilling and other activities.  He also worked at the grain depot in Vinita and served on local community organizations despite the fact that to the best of my knowledge he was not a Cherokee.  During the early 20th Century Vinita was in Indian Territory and governed by the Cherokee nation.  White people could not have businesses in IT without Cherokee permission.

His obituary was on the front page of the Vinita Daily Chieftan 25 January 1907.  “Mr. Sherer was well known in Vinita where he has lived for some time.  He was for several years engaged in the mercantile business in Seneca.  Since coming here, however, he has  been engaged in the business of well-drilling and has drillled numerous oil wells also.”

Why was Dad so taken wth Vinita?  His mother, father, grandmother and uncle (6 years his senior) are all living there in the 1910 census.  A year later dad is born in Kansas City and a year later his father departs for Idaho never to return.

I imagine that dad and his mother returned to Vinita where his grandmother and uncle must have been living.  Perhaps he associated Vinita with family and security. Perhaps a Cherokee woman cared for him while his grandmother and mother taught school.   I think this period is the origin of his belief that he was part Cherokee.  Although I can find no evidence that there is a Cherokee family member, Dad clearly identified with the Cherokee at a very early age and never relinquished the notion that he was part Cherokee.  I would like to find that link–I don’t believe that my father intentionnally fabricated this notion.   He was a boy who needed an identity that was familiar and positive.  Somehow he was led to believe that he was Cherokee.

We all grew up with the belief that we were part Cherokee.  I don’t recall my mother ever disputing or seconding this notion.  My research has shaken our sense of who we are and where we came from.  I think that some of us clung more closely to the idea of our native American heritage than others.  I know that each of us would love to know the truth–is it possible to know the truth?  Ever?